When this tour billing was initially announced, I did have a total WTH moment (well, two). Firstly, that the three bands had been billed together, and secondly, was it capable of selling out arenas around the UK. Steel Panther I regard as a bit of a joke, with the sell by date long since expired. Bowling for Soup for me also fall into the same category. However, Bowling for Soup have been blessed with some catchy teen anthems which used to sound quite “cool.” Bottom of the bill and faced with opening proceedings were the only real quality rock band on the bill. I have been a huge fan of Buckcherry for many years and have seen them several times. I can see the attraction of them taking the gig for reasons of exposing their rock anthems to an arena sized crowd. However, as the show in Manchester Arena was not sold out it failed to generate and maximise any impact that they may have hoped for.

Prior to the arena tour, Buckcherry had played a couple of their own headlining shows. During those they played in smaller venues in front of their own devout fans. The band played a set largely based on their classic 15 album. Unfortunately, in Manchester they had a reduced set time and had to be more particular with their song selection. The sum total was that the minimal audience numbers that had bothered to come in only had a seven-song set to serve as an introduction. Plagued by sound issues for the first couple of numbers Buckcherry were not dealt any favours technically. Josh Todd’s vocals were largely muddied and dulled even from where we sat and those were decent seats It wasn’t until track “Gluttony” that we could hear them properly. Unfortunately, despite delivering an enthusiastic and passionate set Buckcherry music fell on largely apathetic ears. People appeared largely disinterested – a common trait it appears where people only attend shows for the headliners.

For a Buckcherry fan the best place to view the band is in a sweaty club with the band full in your face. I hope that they managed to sway and convert some new fans, but unfortunately, I don’t think that was the case. Even encoring with their sleazy stripper anthem “Crazy Bitch” failed to rouse much of a reaction. I don’t blame the band for their efforts; however, I would question the person who devised this billing.

Next up were quirky pop-punkers Bowling for Soup. I took my son to see this band quite a few years ago and we both pleasantly enjoyed the show. A great combination of catchy anthems with a liberal sprinkling of basic kid-centred humour. However, over the course of the set they delivered at Manchester Arena I was nearly reaching for the Google calendar on my phone. Jokes generally work well on a first hearing, but to revisit them many years later with the exact punchlines… I wasn’t lapping it up as much second time around. Songs still sound catchy and there is no disputing the bands enthusiasm. However, I and many others failed to sufficiently appreciate the clichéd mid song comic elements. Again, best suited to a small club setting – which was largely wasted on the expansive arena stage in Manchester.

Arena headliners Steel Panther are also living in a time warp. From wigs/spandex sexist lyrics and stage mannerisms-basically all I enjoyed about the eighties. However, unlike most classic bands of that era retro works well when it’s done well. For Steel Panther, much like Bowling for Soup at least change the mid-song banter and don’t just rehash all the speeches word for word from the last tour. Steel Panther started by being amusing when they first hit the stages however they are rapidly becoming grating. I did not feel that they were fully deserving of arena headliner status and so it was proved. Many seated sections of Manchester Arena were empty. I predict that if they return to tour the UK it will be several steps down to club capacity venues. No amount of females exposing their tops, or confetti cannons can hide a bad joke. The musicians of Steel Panther, e.g. Satchel, are decent enough players… The joke has grown old, and perhaps it would be time now to play modern music, not clichéd nonsense with extremely limited appeal and leave the wigs behind. 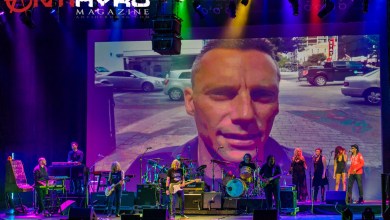 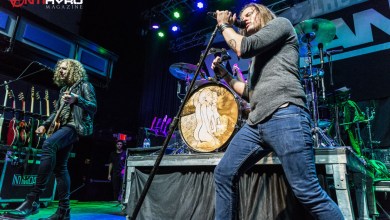 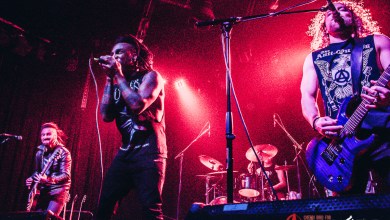 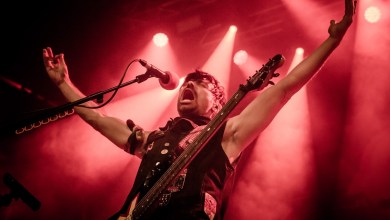