In the current climate of financial instability, many larger artists have adopted for the idea of a touring package. Generally, this will also feature another “name” act, a medium-level band and an unknown artist. This will usually put punters into seats and allow larger arenas to register the “house full” signs. Such it was when Alter Bridge steam rolled through the UK in support of their latest album, The Last Hero. Package partners were Danish rockers Volbeat, French thrashers Gojira, and Like a Storm. Unfortunately, a side effect of the tour packages is that it inevitably results in early doors and early start times, which usually means that the opening act is often playing to a sparsely attended venue.

New Zealand’s Like a Storm are massive in their own country and have extensive touring experience with many of Rock’s heavy hitters. This experience has allowed the band to have finely honed their stage craft, and helped them learn the values of pacing and delivery in large venues. They won over many new fans and I feel that it would be beneficial for them to do a return trip to the UK, delivering their own show.

Gojira were quite a surprise to many of the largely mature rock audience in the Manchester Arena. Clearly a different and much more brutal sound served up compared to the other artists on the bill. While they failed to win over many new fans, they did have a small element of hardcore worshippers who presented their devotion by instigating circle pits, and even some stage diving was in evidence. 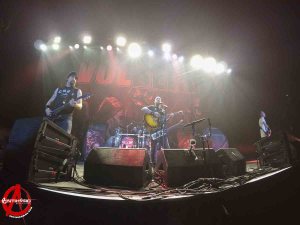 Volbeat I first saw a few years ago, supporting Metallica for two nights in Belfast on that band’s Death Magnetic Tour. They have a unique sound mixing elements of rock, pop and even a flavour of country in forming their own musical style. I had the pleasure of chatting to guitarist Rob Caggiano pre-show, who had told me that playing with Volbeat had allowed him much more freedom than his previous employers, Anthrax. Audience participation was at a premium now as the arena crowd numbers had sufficiently swelled to almost capacity levels by the start of their set. Much of Volbeat’s set consisted of songs primarily from their most recent two albums. Energy levels were exploding from all band members as they covered every inch of Alter Bridge’s huge stage. Volbeat seem to improve with every personal viewing. They left the audience visibly exhausted, and Alter Bridge would have to be on their game to match their efforts for energy and audience interaction and feedback.

Well, from the outset, albeit a new song to open their set, Alter Bridge were straight out of the starting blocks like an Olympic sprinter. Vocals, unfortunately, on the first two set numbers were a little lost in the mix. No doubt singer Myles Kennedy was pouring his heart and emotions into his delivery but his efforts were largely lost to even ourselves in a prime seating location. Sound gremlins fortunately had been extinguished by track 3, and “Addicted to Pain” could fully deliver its sonic majesty to the packed Manchester Arena. “Ghosts of Days Gone By” saw an enthusiastic audience sing a long, and the sound levels were all tweaked and sounding now close to perfection. It was to the credit of the new album’s quality that numbers such as “Come to Life” and “Crows on a Wire” integrated well into the setlist with the older and more recognisable tunes. 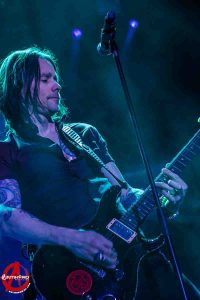 uitarist Mark Tremonti gave singer Myles Kennedy a brief break as he assumed lead vocals on the popular “Waters Rising.” Stunning visuals accompanied all the tracks as the band performed in front of the regular video screen, a staple of arena shows these days. There was a personal introduction ahead of the eloquent and quite beautiful “Watch Over You” – Myles dedicating this number to a father and son whom he had met earlier in the day who had suffered a recent and close family bereavement. This made it a more personal rendition and definitely left not a dry eye in the house – emotive and particularly poignant in delivery on this occasion. The beauty of “Isolation” was followed by the light and soothing “Blackbird.” In contrast, the harsh and heavy rock overload of “Metalingus” caused mass headbanging throughout the venue.

The major part of the set had flown by and it was all too quickly encore time. The band served up “Show Me a Leader” from the new album before concluding the evening’s proceedings with an electric “Rise Today.”

The arena package had served up a veritable tasty ensemble of musical delights, with all bands playing their effective part. From established legends to bright and eager newcomers, the combination had left the Manchester rock audience truly satisfied. A quality night’s entertainment with no one just on the bill to make up the numbers. 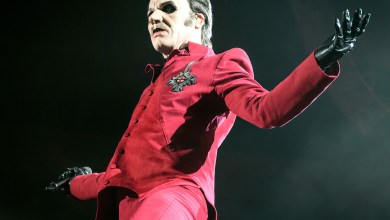 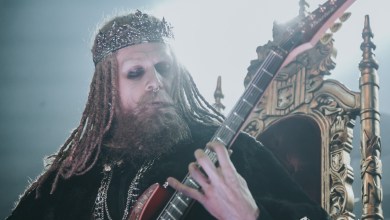 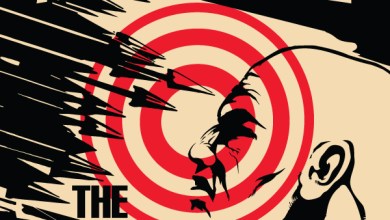