King Diamond returned to New York City for three sold-out nights as part of the current “Abigail in Concert 2015” tour. The openers of the event are California’s equally impressive Bay-area thrash legends, Exodus. Shows like this one in New York City are a rare treat, as it isn’t often that you see diverse and legendary bands like these two playing on the same bill. The venue, New York’s Playstation Theater, was host to this concert a week after the Friday the 13th terrorist attacks on France, and security was on high alert. Metalheads stood united, not only to see these two musical giants of metal perform together, but to set the tone right by letting the city know that they will make their unified message of peace and solidarity clear to the world.

What better way to start the evening’s festivities than with Exodus leading the charge? Vocalist Steve Souza, the voice of Exodus, has the most welcoming demeanor of all the thrash vocalists. Their brief set had the audience wanting more. Exodus opened with the song “Derange” from their 1987 sophomore release, Pleasure of the Flesh, which was an interesting choice. Souza took a moment to educate the millennial crowd on the rules of “moshing” – to take care of each other in the pit – before the thrash legends went into the song “Toxic Waltz” from 1989’s Fabulous Disaster, which resulted in the most amazing mosh pit in the history of man. The eight-song set was not enough and the fans in New York City are anticipating their return. Humbly Steve Souza thanked the audience and warmed up the crowd before introducing “Sir King Diamond.”

The lights went eerily dim as Uriah Heep’s “Rainbow Demon” and “The Wizard” played while the roadies were assembling the elaborate stage set. It would have been nice to have the stage handlers dressed in Druid robes for the full effect. As the house lights went darker, the playback music of “Out of the Asylum” plays, the crowd screaming with delight as Grandma crept onto the stage in her wheelchair with King Diamond singing “Welcome Home.” Seeing the songs come to life conjures a sense of a beautifully dark vaudeville act. King Diamond also covered material from Mercyful Fate, and the man still pulls no punches when he belts out songs like “Melissa” and “Come to the Sabbath.” King Diamond’s portion of the Abigail set was just as eerie, if not more so, due to the mock funeral of baby Abigail. With the background music of “Funeral” playing, King Diamond holds baby Abigail and slams her into the coffin before going into the classic “Arrival.” The band recreate not only the ambiance of the record, but deliver a flawless performance of the entire Abigail album. It is amazing to see both of these aspects done correctly, and by throwing in the theatrics and imagery of grand staircases, pillars, and mummified babies, the audience is transported directly into the dark world where Abigail was born. No one knows when King Diamond will do this again, and all we can do is appreciate and admire what this master of the macabre brings to his fans during each and every show. At one point in the evening King Diamond sings “I’m glad you could come back from the other side to join us once again.” These lyrics have a double meaning as King Diamond closes the night. [blog type=”grid-overlay” heading=”King Diamond with Exodus” heading_type=”block” posts=”-1″ tags=”king-diamond-featured”/]
Sebastian Bjorn BenedictNovember 29, 2015 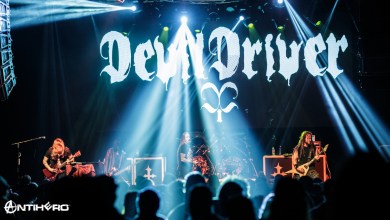 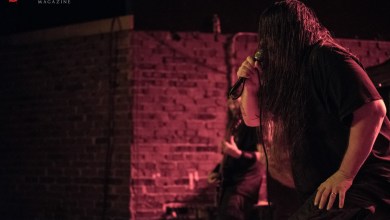