[separator style=”line” /] When someone says European capital city of culture, you would hardly imagine what exactly happened at Stadium Wrocław on the last Saturday of August 2016. Poles certainly made the perfect choice by making this day in Wrocław the Capital of Rock, that’s for sure.

After two Polish bands, Red and OCN, the first international act on stage was Gojira. During the first few words to the audience, the guys were joking and Joe screamed “We are Bullet for My Valentine!” which earned a round of laughter followed by the real introduction of this French band. BFMV were supposed to play at Capital of Rock, but since they got stuck in Japan due to bad weather, Gojira replaced them on the bill. And let me tell you, this was certainly a great choice by the organisers, since Gojira was more than a sufficient replacement. Joe Duplantier certainly has a great and powerful voice, and although the Stadium was only half full, there were already thousands of people to watch their set. These guys are really fun to watch; they are humble and easy going, and their live show is full of energy and even features flying whales!

Next on the bill were Limp Bizkit. I have to admit; I was more than a little skeptical. I’ve seen the band a few times before, and at the time I was not impressed, to say the least. But in Poland, it was a whole different story, and a very pleasant surprise for me. Fred Durst and his bandmates didn’t look bored out of their minds, and for once they were enjoying the show and not only playing to be done with the concert. And it made such a big difference, it was quite unbelievable. This was officially my first time seeing Limp Bizkit where I actually enjoyed the show.

Some 15 minutes short of 11PM, the Stadium got finally full. And when I say full, I mean absolutely packed. The floor was crowded, and I don’t think that one place stayed empty even on the tribunes, and that says something.

Anyone that has had the pleasure to attend a Rammstein show before knows that these guys just deliver. From the first song till the very end, it’s a sight to behold. For how old the band is, they are still going strong, and many of the young and upcoming bands still have a lot to learn from them. From Till Lindemann‘s antics, to the amazing live music performance, and the epic show full of fire. Because there are certainly not many shows where you can see flamethrowers a.k.a. guitars, a singer with a burning bow, or a pyro show not only on stage, but also at the soundboard between the people, boiling the crowd to the maximum! And people were mesmerized by the whole ordeal. During “Ich Will” all the hands were high up in the sky, and the chanting of “Du hast” must have been heard all over Wrocław, shaking the city to the ground.

As an encore, of course, “Amerika” couldn’t be missed, with the confetti spilling all over the fans, as well as little sparkles that matched the sparkling outfit of keyboardist, Christian “Flake” Lorenz. To top it all, Till Lindemann appeared during the last song of the concert, “Engel,” suspended in the air with massive black wings bursting flames high up into the sky. The band even made an effort to thank the fans for an amazing night not only in German, but also in Polish.

All in all, if you haven’t seen Rammstein yet, be sure to go! This is one hell of a show no true metal fan should miss! 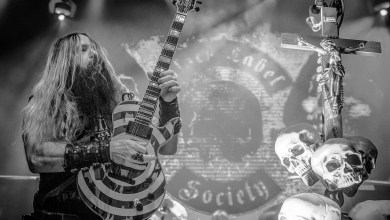 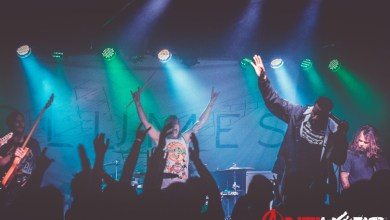 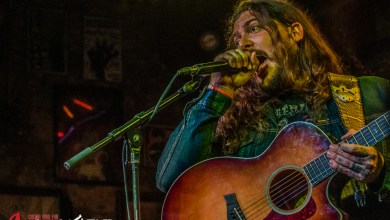 Concert Review and Photos: AMIGO THE DEVIL in Dallas, TX