Dean Wells and the members of Australian progressive-rock outfit Teramaze return with a brand new musical gem with Her Halo.

…Her Halo is Teramaze on a whole other sonic, emotional, and structural level…Its arrangements are lush and brilliant, and the band will certainly reach unimaginable heights with Nathan Peachey on board.

Even if rock music as a straightforward genre isn’t getting nearly as much widespread attention as it used to, one of its subgenres, progressive rock, is continually heading in the right direction. Part of its allure stems clearly from virtuosity and conceptual structures, but another of its components is becoming increasingly more prominent—accessibility.

For Australian quartet Teramaze, that component is effectively captured to the fullest extent. The band has grown tremendously from their initial thrash incarnation over 20 years earlier. Since last year, Nathan Peachey has earned the slot for full-time lead vocalist. Peachey’s style still exhibits a vast range, but is decidedly smoother, giving the album an unexpected yet undeniable pop appeal. And in Teramaze’s latest, Her Halo, the extent to which the pop element is utilized effectively transforms its presentation.

“An Ordinary Dream (Enla Momento)” opens the album with progressions that are expected, but far from formulaic. The guitars are crisp in acoustic form and work especially well with the chords being played. As they went overdriven, I felt it sensible for the rest of the instrumentation to spiral out in a thunderous dance of drum fills and synthesizers. Once the verses start, the listener can really get a sense of the attention to detail in the production. There is a clear instance of polish, but it is quite wet and warm—the kind that allows the other components of the song to breathe and complement one another. The bass acts like a pad to elevate the briskness of the acoustics, its melody intriguing and full of curiosity. I was also drawn to the song for its sparse lead melodies that wrapped each part of the verse. What resonated with me the most, however, was how much the song played out like a dream. Each section represents a certain arbitrary shift in mood—from lucid and mighty to constricted and helpless—which is justified by the sincerity of Peachey’s tone and universal lyrical flow. The track to follow, “To Love, A Tyrant,” kick-starts the metal edge, and its heaviness still manages to shine amidst polished production values. Its subject matter takes on the darker side of love as something of an inescapable bind. Structurally, the riffs and percussion act as the victim taking a fighting stance, and really come off as motivational in handling a force beyond comprehension. The song is still a bit on the long side, clocking in at nearly eight minutes, but its single-driven pacing makes for frequent replays. And accordingly, right as the song lengths shorten, the album begins to showcase a hooky side. The album’s title track easily shatters expectations as an anthem suitable for both the arena and radio. The energy of new bassist Luis Enrique Eguren begins as a deep and vibrant foundation on the intro, then transforms into a commanding presence that sports a newly chunky quality. Again, the lyrics are distinctly pertinent, acknowledging a love interest’s guise of holiness and purity to compensate for her vulnerability. 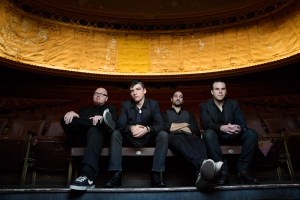 By the halfway point of the album, the pop sensibilities continue to gleam, while still maintaining a strong metal focus. On “For the Innocent,” there is a balanced emphasis on piercing riffs, power chords, and stripped verse structures. Just hearing Peachey’s stationary range on the first verse is proof that he can deliver sufficiently without having to belt it out. When he does on subsequent phases, he skillfully utilizes such technique to keep smooth while also having a certain bite. This is the song that won him the opportunity to become the band’s singer, and rightfully so. Perhaps the catchiest song on the album is the penultimate, “Broken.” Although a lot softer and more streamlined compared to the other songs, it once again demonstrates the band’s incredible ability to extend their audience reach without compromise. Peachey’s harmonies blend beautifully into the acoustic guitars, and it really provides incentive as to how much the band has matured. But even if progressive metal listeners with more purist tendencies may shy away from it, the intricacy and power they desire returns on the final track, “Delusions of Grandeur.” Interestingly, this is where the elements of metal, rock, and pop all find unity. It is structured so that each time one is emphasized, it finds itself embracing the other. Warm synths elevate Peachey’s voice, its contrasting quality matching the intensity of the lead guitars. At around the seven-minute mark, the solo develops from a momentary feathery bliss into a heart-curdling knife barrage with maniacal laughs and screams in its core. After the ensuing chaos, a sudden burst of positivity brightens the latter portion of the track, bringing a sense of ultimate fulfillment and essentially completing the arrangement of the chorus.

Overall, Her Halo is Teramaze on a whole other sonic, emotional, and structural level. Whereas Esoteric Symbolism strove for a slicker, but pithy heaviness, this album took them in more of a seasoned and sentimental direction. Its arrangements are lush and brilliant, and the band will certainly reach unimaginable heights with Nathan Peachey on board.

Check out the “Her Halo” video below!