If you’re familiar with The Agonist, you likely already know most of what to expect on Five, and your enjoyment will depend on whether you prefer their melodic moments (in abundance here) or their heavier side (still on display, but a little less frequently). For those new to the band, Five is actually a good starting point. It’s a little less aggressive than any of their previous albums, but it doesn’t pull punches during the heavy moments.

For over a decade, Canadian band The Agonist have been delivering their signature mix of death metal and huge, hooky choruses, with a woman delivering both the clean and unclean vocals, frequently switching between the two. Each album has shown development without veering too far away from that core formula, and their fifth album, titled simply Five, continues the trend of both growth and familiarity.

Opening track “The Moment” is a good summary of the entire album: the main riff is simple (we’re talking Pop Evil simple), but it’s also immediately catchy, while a surprisingly proggy bassline twists through the verses and gives the melody most of its flavor. The initial vocal line from frontwoman Vicky Psarakis is ethereal and drifting, but is quickly buried by a snarling, rabid scream that propels the verse along. The chorus is full of big, open chords and arena-goth clean vocals that recall Amy Lee or Within Temptation frontwoman Sharon den Adel. This mix of arena-sized hooks and bursts of mayhem continues throughout the album, and the anger actually feels even more effective than on previous albums since the lighter moments are significantly lighter. “The Chain” has a nasty hard-charging riff and some flamboyant double-kick theatrics from drummer Simon McKay, who is an absolute beast this entire record and steals multiple songs just with his footwork. He knows when to hold back and when to pummel, and never overwhelms a song even when he’s carrying it. He certainly carries “The Chain,” which struggles to stand out vocally or lyrically. The intro to “The Anchor And The Sail” is another highlight for McKay, who trades snare bursts with a bouncy riff in a back-and-forth tug of war that completely overshadows the rest of the song. The power metal/thrash sound is strong again, and Psarakis has some really impressive vocals (especially on the chorus), but that riff/beat combo is so good it still takes center stage.

“The Game” is excellent, charging in on another simple-but-catchy guitar line and some throat-tearing screams from Psarakis. They go for another huge chorus, but Psarakis chooses to focus on her unclean vocals with harmonized cleans in the background, and it pays off big time. It’s the same formula as most of the songs here, but it’s one of the most successful. Alas, “The Ocean” is the opposite. Psarakis delivers some pretty impressive 90s-alt style vocals on the verses, but the song feels like a build to something bigger that never comes; instead we get a sort of drifting mid-song interlude where a blistering 80s thrash solo would have fit much better (and the brief solo buried under the post-break chorus just feels like a teaser of what could have been). “The Hunt” does nothing wrong, but it fails to stand out. There are better and similar verses and choruses on most of the other songs, and this may be the only truly skippable song on the album.

“The Raven Eyes” is well-placed in the middle of the album, and offers a complete change of space. A sort of mournful classical-influenced guitar and a lounge jazz piano line lead to a cabaret-soaked vocal that drips both sex and contempt while telling a tale of murder, eventually joined by a subtle string section, which enhances the song rather than feeling like a gimmick the way string sections usually do. Even following interlude “The Wake” is worth mentioning: starting as a piano-and-flute instrumental passage, the orchestration that builds to “The Resurrection” is, like the strings on “The Raven Eyes,” subtle and memorable. It’s rare that an instrumental interlude is anything other than filler, but The Wake is an important part of the album experience, and the build into “The Resurrection” is needed, because it is the heaviest song on the record and one of the heaviest The Agonist have ever done. The massive wall of double-kick from McKay is ferocious, and he accents it with a relentless sharp ting from his china cymbal that just makes the whole thing feel even more suffocating. The unclean vocals are downright evil, and even the cleans feel just the right amount of dark to be unsettling rather than pretty. The guitars get in on the action as well, delivering a perfect riff for every part of the song, even the repetitive, chuggy break that feels like a much-needed breather instead of filler. The song is over 5 minutes and morphs multiple times, but never loses steam. “The Villain” starts just as strong, with a thrashy riff, unhinged vocals (pay attention for the banshee shriek at around 3:09), and another killer beat from McKay, with a snappy snare firing off like gunshots, often on upbeats, which gives the song a jerky momentum paired with the roaring guitars. The cleans on the chorus feel obligatory rather than necessary and throw some of that momentum, though, and I can’t help but feel sticking to purely screams would have made this song another career standout instead of just a good song.

“The Pursuit Of Emptiness” contrasts a crawling, dark verse with the biggest, poppiest chorus on the album. I usually prefer Psarakis’s unclean vocals to her cleans (her screams are far more distinct, with a throaty, wet sound added a black metal base), but her cleans on this song are phenomenal, and sound earnest and powerful in a way she often doesn’t. This is without a doubt the chorus to beat on the album, both for vocal performance and becoming a potential live sing-along. “The Man Who Fell To Earth” features another prominent bassline from Chris Kells over a moody, gentle song, but it doesn’t really go anywhere, starting to build to something bigger and then backing off. Psarakis’ also adopts a sort of Maria Brink-esque vocal lilt, which may work for some fans, but doesn’t for me. Closing track “The Trial” is unabashed goth metal, and has an oddly effective 90s-alt style chorus vocal that channels, of all people, Gwen Stefani. Much like the previous track, however, it feels like the song is building to something it never introduces. It might work OK in the middle of the album, but it’s not a good closing song at all. (The bonus version of the album includes a mediocre cover of Hozier’s megahit “Take Me To Church.” If the albums are the same price, go for it, but it’s definitely not worth paying extra for and will probably be a one-time listen.)

If you’re familiar with The Agonist, you likely already know most of what to expect on Five, and your enjoyment will depend on whether you prefer their melodic moments (in abundance here) or their heavier side (still on display, but a little less frequently). For those new to the band, Five is actually a good starting point. It’s a little less aggressive than any of their previous albums, but it doesn’t pull punches during the heavy moments. If you have friends who are into bands like In This Moment or Halestorm and you are looking to introduce them to something a little heavier, Five may be their gateway drug. 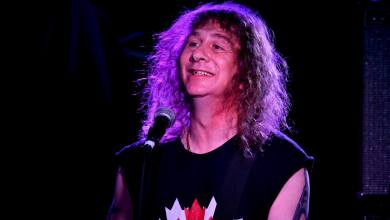 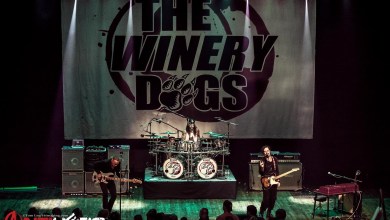