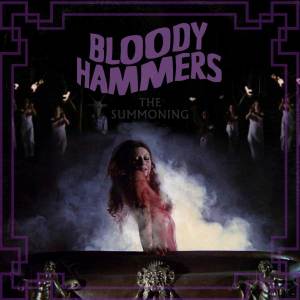 A shadow descends over the winding landscape beneath the dominating mountains as a solitary, bloated cloud boldly makes its way to stand defiantly against the moon.  A chill nefariously creeps in like a thief in the night armed with tiny daggers to pierce the skin down to the bones.  As fog settles in the valley nestled below, the lonely call of a wolf sends tremors through the nerves of any brave enough to witness such a night of malediction.  This is a snapshot of one night in Transylvania; however, this is not the storied land populated by the stoic Carpathian Mountains but rather another continent entirely.  From the Smokey Mountains in Transylvania County, North Carolina, Bloody Hammers have descended to bestow upon the music world yet another full-length, their fifth in fact, entitled The Summoning, out now on Napalm Records.  Bloody Hammers is a unique musical outfit in today’s scene incorporating elements of classic Heavy Metal, Doom, and Goth Rock.  Such a combination sounds like a tall order indeed, but Anders Manga, vocalist, bassist, guitarist, and main songwriter along with the enchanting Devallia who handles keyboards manage to concoct an intoxicating brew full of atmosphere and propped up by catchy hooks.

There is a heavy air of Doom Metal within the music of Bloody Hammers.  One can hear the echoes of classic Ozzy-led Black Sabbath penetrating the riffs composed within.  The songs are not slowed down to a crawl as in most Doom, but rather, the influence is manifested in the importance put on the almighty riff.  As uttered on Down’s second LP, “The power of the riff compels me”.  The third track, “The Summoning,” is a prime example of this.  Combined with an infectious chorus and mood-setting keyboards, the riff propels the song to new heights giving it a palpable, dirtiness with its down-tuned girth.  Another example of the Doom nature of the band is the eighth track, “Condemned, the Prisoner”.  It begins with an eerie, tremolo-effected, almost Western sound.  It would not be much of a stretch to imagine the late Johnny Cash crooning the verse section, but then the distortion kicks in with a powerful, sorrowful, megalithic riff.  The switch between different atmospheres, even styles, shows the band’s grasp of dynamics.  A track like this truly has a lot of potential as myriad of music fans would certainly latch on to its grasp.

The other key ingredient to the band’s sound is classic Goth Rock.  This does NOT equal Marilyn Manson, Nine Inch Nails, or Rob Zombie!  Bloody Hammers channel the quintessence of the style in crafting songs with a heavy Sisters of Mercy influence.  Like Sisters of Mercy, the bass plays a prominent role often leading the song melodically and rhythmically simultaneously.  “Welcome to Darkness,” the sixth track, is a prime example of this side of the band.  Anders lets his Goth side flow with a dark narrative sung with a deep vocal melody.  In parts, the vocals are doubled with an über low track underneath providing an authentic Gothic feel.  Certainly, the thick-laden keyboards with strings, dark synths, and powerful choir sounds aid the effort sublimely.  Another essential is the steady thump of the bass drum which gives the song a constant, danceable beat that one could hear pumping down the block from a Goth/Industrial club.  Electric Hellfire Club’s balance of Metal, Goth, and Industrial can certainly be heard resonating in tracks like this.  Once again, it is an amalgamation of styles that can appeal to many.

The penultimate side of the band is when these styles truly converge.  Glenn Danzig understood this when he guided the Gothic approach of Samhain into his solo project which reclaimed the atmosphere but injected it with the gargantuan riffs of John Christ.  Peter Steele most prominently synergized plodding Doom with catchy Goth hooks laden with atmospheric keyboards and Beatle-esque harmonies when he moved on from Carnivore to Type O Negative.  Both of these aforementioned artists’ influence seep into the Bloody Hammers mix, especially as heard in the first track and single, “Let Sleeping Corpses Lie”.  This track is predatory in the way it creeps into the most minute crevices of the brain to reside in perpetuity.  It is also the best adaptation of the band’s sound as it incorporates a powerful riff, heavy Gothic vibes via supernatural, haunting keyboards, and a rousing chorus showing off Ander’s pipes.  It must be said that this is one of the most well-crafted, hypnotic songs heard in quite some time and were this not the case, the comparisons to such timely classics would not have been made.

Bloody Hammers is definitely an exciting, promising band and one to watch.  Their incorporation of campy horror tropes and deadly riffs may not be altogether original, but they do manage to put their own unique stamp on their patented brew.  The only downside to be mentioned is that the strongest track is the very first.  Though the other tracks are certainly not a letdown, it seems the band would have been better served by letting the album build up to that track.  Then again, “Christian Woman” was the first proper track on Bloody Kisses.  In a music world that is now more divided than ever by the strict lines of sub-genre, it is refreshing to hear a band with the initiative to mix a formula of often disparate styles into one that is easy and enjoyable digestible. 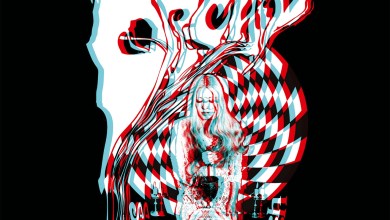 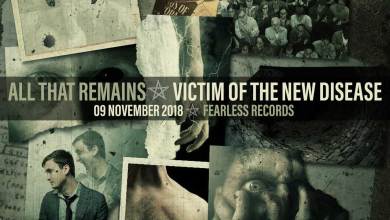 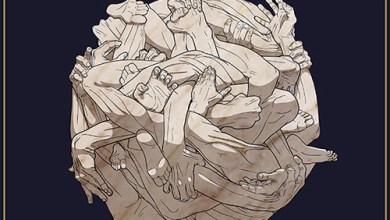 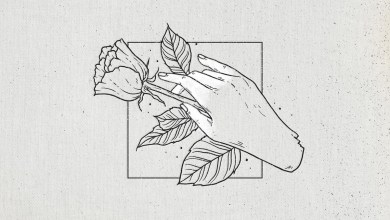