Lamb of God – As The Palaces Burn 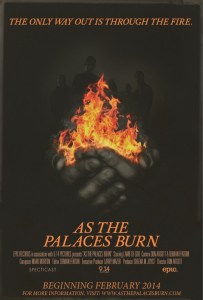 “Pure American Metal.” That’s the slogan written across the emblem on my beer-cozy. And at the top, displayed proudly above the outstretched wings of an eagle’s skeleton is the name of the band…Lamb of God. That’s exactly what Lamb of God is – pure American metal at its finest!

The metal scene these days is really an exciting and ever-expanding place, full of diversity if you look at it the right way. You have to see past the ridiculous over-compartmentalization of musical styles, where every nuance creates a need for a separate sub-genre. You need to get past the absurdity of kids bullying other kids because they like one band over another. You’re already outcasts in the eyes of society, why create schism amongst your own ranks?

Metal is really about unity, and, in my opinion, that’s what lies at the heart of the overarching theme throughout As the Palaces Burn. The film was originally to be director Don Argott’s vision of a documentary that would showcase the power of metal music to unite and overcome life’s obstacles. With stories from various devout Lamb of God fans around the world to singer Randy Blythe’s battle with alcohol, As the Palaces Burn, would have surely been inspirational and insightful with the original concept alone.

However, the documentary took a tragic turn when Lamb of God landed in Prague during the European leg of the tour supporting their latest album, Resolution. Argott takes us on the journey of what followed Blythe’s arrest, as we learn the details surrounding the case and hear testimonies from fans, as well as Blythe himself and gain insight into what was going on with the rest of the band at this time. As the film unfolds, we witness a story full of integrity and resolve. But before we get into it, check out the trailer…

The film begins in Richmond, Virginia, with a clean and sober Randy Blythe showing us one of his favorite spots to just hang out and think. A river flows by in the background as Blythe talks about times in his past when he lived here periodically “down by the river,” and jokes that he didn’t even have a van to sleep in. Blythe is a new man – energized and articulate, humble and appreciative, ready to move forward and embark on the new tour in support of Lamb of God’s latest effort, Resolution. The album’s title is a testament to this new state of mind, and a reflection on the battle with alcohol that kept Blythe from moving forward and which nearly cost him everything he had achieved. Randy states “music is the reason I’m not in prison.” These words will take on new meaning in some sort of ominous and twisted irony as the film develops.

The film then shows some deeply introspective interviews with Lamb of God members Mark Morton (guitar), Will Adler (guitar), John Campbell (bass) and Chris Adler (drums) as they reflect on the changes in Randy; sharing stories, some photos, and videos from previous tours that have never been seen, and we begin to appreciate how far the band has come from its humble beginnings to be at the top of their game.

As the tour begins, the film takes us into the lives of a few fans and shows that music has the power to heal and unite. We meet Oscar from Columbia, a young man who has lost many friends and family to the violence of the drug cartels. He finds peace and a purpose within the music that he loves, and says that metal is “all he understands and it gives meaning to his life.” In India, we find Pratika, a young woman who is also an aspiring singer in a metal band, despite being looked down upon by the society around her. We meet several Indian fans who have traveled great distances and, in some cases several days, to see a Lamb of God concert. For those of us that live in our own cultural vacuum, we begin to see that things are not so different all around the world, and that metal music has the power to unite people of all cultures. Argott was clearly on focus for the initial conception for the film – to show how music can bring people of diverse cultures together and empower individuals to overcome even the most insurmountable obstacles. Then the proverbial shit hit the fan.

The band’s manager, Larry Mazer, gives a quick overview of the events that transpired leading up to Randy’s arrest and then goes on to talk about how hard Randy has worked to turn his life around. He mentions that for the past eight years of managing Lamb of God, during the first six-and-a-half of which he used to go to Chris Adler as the main contact point but that recently Randy has been his go-to guy because “he has gotten his shit together so much.” He confides that his biggest fear is that this event could trigger a downward spiral for Blythe. LOG members describe the surreal nature of the events as they unfolded, and at times it is painful to watch as they talk about their feelings of helplessness and inability to help their fellow band mate. We are shown video footage from the night in question, and the band tries to describe the energy at a metal concert and how it may appear violent at times from an outsider’s perspective. What follows is some amazing and emotionally charged moments as the band reflects on Blythe’s homecoming, as well as footage and testimony from friends and fans.

Don Argott has done an incredible job of capturing some of Blythe’s personal and introspective moments, as he contemplates the uncertainty of his future and the deep pain he feels for the family of Daniel Nosek. He wants to give the Nosek family the closure they deserve. He believes the only right course of action is to return to Prague and face the charges because he is an innocent man and nobody “can make him guilty.”

The last part of the film goes into detail regarding the actual trial and we get to see and hear aspects that have never been disclosed previously. We are shown the video evidence and listen to witness testimonies as the trial unfolds, and the viewer is taken on an emotionally fuelled ride as we hear from members of Daniel’s family. The director captures these moments skillfully and with the respect that the subject matter deserves. After the verdict is read and Bythe is exonerated of all charges, we see him leaving the courtroom.

After a brief pause, we find ourselves back at the rehearsal space where the band describes the feeling of being Lamb of God again and how Randy’s character throughout this ordeal has been one of resolve, and as one band member states that it “has been inspiring to see him walk the talk.” Bassist John Campbell said that when they were naming the album “Resolution,” for Randy it meant “staying on a path no matter what.” The film ends with Blythe back at his favorite spot down by the river as he reflects on the journey his life has taken him, and how music is what laid the foundation for his values and beliefs.

“For me,…you can talk all day long about what you believe in, but when push comes to shove, are you going to do what you believe in? And I can’t go around espousing personal responsibility and saying how screwed up the world is in my songs if I don’t act like that.”

Resolution. Resolve. Integrity. Pure American Metal. This movie is a must-see and shows a Lamb of God that has walked through hell and is stronger than ever. I enjoyed every moment of this film, as Don Argott takes us on a path that allows us to look into the lives of these musicians and to understand some of the challenges that were faced and overcome through their own resolve and resolution as bandmates. The honesty and integrity of all involved, from the band members themselves to the amazing and personal stories of the fans that are documented in this film, make me proud to be a fan of Lamb of God, and proud to be “Metal for Life!”

The main film is followed by a 30-minute question and answer session with Eddie Trunk featuring the director, Don Argott, and the entire band. There is a ton of valuable insight into the concepts behind the film and how the film evolved based on the drastic turn of events in the lives of the band members. This casual behind-the-scenes footage is a great bonus for any fan and offers some very candid and revealing insight into band member’s side of the story. Blythe confides that if he had not made the choice to go back and face the charges he would not have been able to continue, and would most likely have fallen back into his darker past. 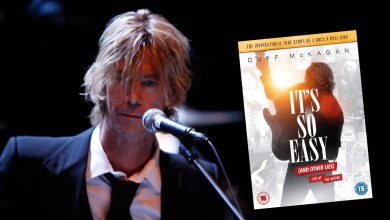