A Conversation with Wolves In The Throne Room Drummer and Co-founder, Aaron Weaver

ANTIHERO: Hi Aaron, how are you doing?

Aaron Weaver: Well, I’m good this morning, I’m just settling into the studio, I’m going to work on some music and do some record label business.

ANTIHERO: First of all, I’d like to ask you why you are not touring with Wolves in the Throne Room at this time.

Aaron Weaver: My place is at home here, in this forest. You know, Wolves in the Throne Room is this entity like a family and a clan, the way I serve the family right now and serve the music is to be home and keep the home fire’s burning here in our studio in this forest, which is our inspiration. That’s everything that we do, we carry forth the voice of this forest, of all these spirits that are in our stories and in our music; someone’s got to be here to deal with them, and that’s me.

ANTIHERO: The band has been away from Europe for quite a long time, it was 5 years since the last time you came over here, why did it take such a long time, was it difficult for you to come back?

Aaron Weaver: Oh no, the shows that we had recently in Europe were bigger than the shows from 5 years ago. It’s always wonderful to come back to the stage, but it took a long time to make “Thrice Woven”, we had to spend a long time in the studio to work on it, gathering inspiration. But now it’s time to be on the road, for sure.

ANTIHERO: I’ve seen Wolves in the Throne Room a couple of weeks ago for the first time and I must say I was pretty impressed with the kind of atmosphere you create during a show with the incense, the smoke and so on; did you decide arbitrarily how to set the show, did you sit down to think of what to do to create that atmosphere, or is it an evolution of small touches you added to the show over time?

Aaron Weaver: It’s been an evolution, and I think a big part of what you see on stage right now has to do with the fact that our friend Peregrine Sommerville is playing the third guitar, he’s in a band called Sadhaka which is another Black Metal…specifically, Cascadian Black Metal musical project, and Brittany McConnell from Wolfserpent, a band from Boise that we have toured Europe with before, great friends and comrades of ours, she’s playing keyboards and percussions, and a lot of the atmosphere we see on stage right now comes from them.

ANTIHERO: With the last album you got back to your Black Metal roots after the Dark Ambient digression of Celestite; was that album supposed to be a one-off experiment, or were you planning to continue on that path, but then changed your mind?

Aaron Weaver: That was always a unique moment in Wolves in the Throne Room’s history and we said it at the time, when I did interview I said, “This is, you know, an experiment, a one-off studio project” and it’s just the ambient side of “Celestial Lineage” was a necessary part of our artistic development. But we do plan on making Dark Ambient music in the future but have a new entity for that called Drow Elixir that debuted at Roadburn Festival some months ago. So, when Nathan, Kody and myself have the need and the desire for music that doesn’t fit into the Wolves in the Throne Room form we have that space, that entity, Drow Elixir.

Aaron Weaver: I don’t think Steve will sing on our records ever again, that was like a blessing that he brought that was so powerful, so magical, he came and said what he had to say, it touched my heart so much that he did that. But, I mean, Steve is always gonna be there as a mentor and as a teacher, the way it goes with Rock N’ Roll bands it that often an older band will take you under their wing and show you how to do it, how to do music with integrity and honor and respect and how to do it in a good way. Steve and Neurosis definitely have given us that. But the way he came unto the project is, our producer Randal Dunn who produced “Thrice Woven” and all of our other records with the exception of our debut…we knew we wanted the voice of a man on the record, we wanted the voice of an elder, someone who’s wise and who could speak with authority about the things that are in our hearts and that we believe in; we told Randall, “That’s the voice we want and need” and he said, “Let’s just call Steve, Steve Von Till”, ‘cause Randall had just produced one of Steve’s solo records. That’s the way our connection was made.

ANTIHERO: Your songs have a strong spiritual vibe, both in the music and in the lyrics, when you tour, however, you surely experience some physical discomforts, so to say, with the traveling and all of that; is it hard to stay attached to the spirituality of the music when touring?

Aaron Weaver: No, it makes it easier. Because touring stress away everything else, there’s just the music, there’s just this expression. Between the times on stage there’s a good amount of ordeal because you’re right, touring is hard, it’s very physically demanding so the music is the celebration we have once a day, and it’s necessary. Without going on the road, without playing in front of an audience, in front of our fans, we’d be missing so much. It’s those fans, the people that come to our concerts that give us so much strength and inspiration, I’ve got so much gratitude for those people, I think about it every day.

ANTIHERO: In the latest album with the song “Angrboda”, your reference to the Nordic mythology, a topic that is geographically quite far from you; is it natural for you to go and touch those kinds of themes?

Aaron Weaver: Oh yeah, very much so. I think because those are some of the stories that I grow up with as a kid; as long as I can remember I’ve loved old stories from all over the world. It’s just what we have, this is the wisdom that we have to work within our human lives. And those are the stories I tell my son too!  The Old Norse stories, they feel really relevant, especially living in this modern world, I see a lot of wisdom there.

ANTIHERO: Talking about lyrics, Black Metal started as a very extreme genre in lyrics as well, other than in the music of course, with the Satanism and all those sorts of things. In the Cascadian scene you went quite far from that: were you afraid in the beginning that the themes you dealt with were going to be considered as a blasphemy to Black Metal, something that shouldn’t have been used as lyrics in a Black Metal context?

Aaron Weaver: Well, we were never afraid, that part is clear, because this is what we had to do, this is our truth, this is our music, this is our Black Metal and we never apologized about that. But, yeah, it’s different! Of course, it’s so different, Wolves in the Throne Room and the energy we work with and what is expressed feels very, very differently than Watain and this other kind of Satanic bands, I feel very happy about that.

ANTIHERO: The time passing between the releases of your albums grew constantly over the years, does it get harder to find the inspiration, and the time, to compose and record new music?

Aaron Weaver: No, I don’t think so, I took the time to think about it because every record feels so different, it’s just a very different time in life. I don’t know how old you are but I just turned 40, Nathan is 38, Kody is 38…it’s a wonderful position to be in to look back at life and see all these different times, all these different moments, and I feel very happy to have our records as documents of what was happening, you know, of what was going on. And now it feels the same, the inspiration is always there.

ANTIHERO: What should we expect from the future of Wolves in the Throne Room, I guess it will be some time before a new album, are you planning to tour a lot more before then?

Aaron Weaver: Yeah, there’s a good amount of touring coming up, there is another full tour of the USA in February, then we’ll be in Europe doing festivals in the summertime. I’ve got to say, between now and then I really hope to get to the studio and start working on some new material, we feel really inspired right now. I’m feeling that it’s not gonna be another 4-5 years before our next record.

ANTIHERO: So, you already got some new ideas to track down?

Aaron Weaver: Well, yeah, it’s true. I think we’ve got a lot of material, a lot of riffs, Nathan and Kody all have a lot of ideas and concepts. It’s just a matter of finding the time to get in the studio and give those ideas the full space to blossom and became an album that we are very proud of.

ANTIHERO: Well, that was my last question, thanks for your time and I hope to see Wolves in the Throne Room again soon.

Aaron Weaver: Yeah man, hey, it was a pleasure to speak with you, thank you so much. 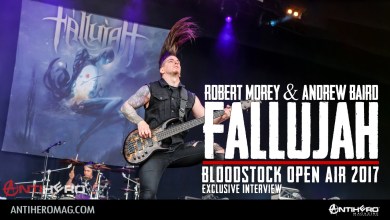 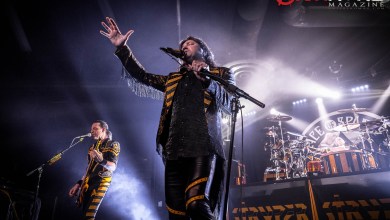 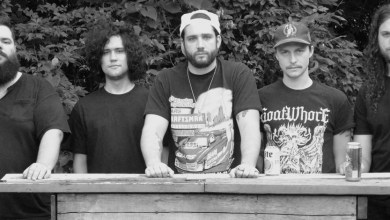 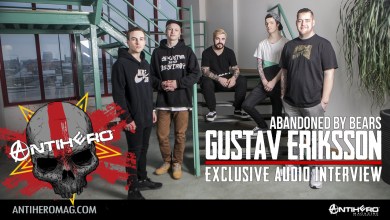