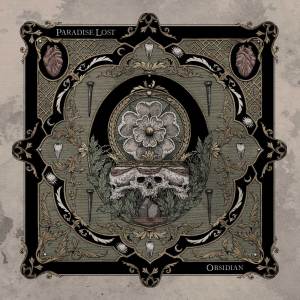 What can be said about Paradise Lost that has not been said already? Beginning in 1988 (!), the band pioneered the Death/Doom genre early on alongside the other two bands that comprised what has become known as the Peaceville Three, Anathema, and My Dying Bride. Each of those three prolific bands strikes a different chord for this long-time fan and as such, I could go into a graduate-level dissertation on the specific facets of each. For the sake of brevity, though, I shall eschew that temptation and remain focused specifically on Paradise Lost. It was actually the band’s fourth full-length, Icon, that served as my introduction to Paradise Lost. By that time, the band had trimmed some of the fat and were focused on a sound that had shades of a more dirge-filled, solemn Metallica. Draconian Times, which followed two years later, was a giant leap forward with a more orchestrated, Goth-influenced sound. That Hetfield-ish approach of Nick Holmes was retooled in favor of a darker, captivatingly haunting, atmospheric perspective. The band, along with compatriots My Dying Bride and other Euro-Metal staples such as Moonspell, took a detour from their established style in the late 90s with a heavily Depeche Mode-influenced sound on One Second. While Paradise Lost did experiment more with this more Electro-Pop style, they eventually came full circle returning to their roots with 2002’s Symbol of Life. Even on their brief diversion, though, the band were still incredibly compelling and many still cling to that period as a vital one. While that segue was certainly less heavy, the quality of the writing did not diminish. In fact, it can undoubtedly be stated that the band have improved as time has passed, a singularly rare feat that distinguishes them above and beyond myriad Metal lifers. Paradise Lost have now returned in what has been the darkest year of their existence and with Obsidian, have indeed penned a momentous soundtrack for the bleak.

In a very poignant, if somewhat subdued manner, Paradise Lost kicks things off with “Darker Thoughts”. Framed by acoustics and a very pronounced orchestration, the band focus on their more melodic side. In fact, it is not until about two minutes in that the full band kicks in, and when it does, it is nothing short of magic. Nick Holmes employs his softer approach for the initial moments of the song before letting it really rip with his perfected dry lung style for the heavier bit. It is a song that is like a bridge between the different periods of the band. There is the catchier style the band employed for their Metal sabbatical on albums like One Second and Host, and of course, the Goth-Doom approach of seminal albums such as Icon or Draconian Times. It demonstrates a sophistication through the band’s ability to tap into its collective strengths and synthesize them in a manner to please long-time fans across the board.

The following track, “Fall from Grace,” is really where the album kicks off, though, at least in terms of momentum. The main riff, though simple in nature, is a visceral display of intensity. The myriad guitar tracks stack up to provide a sublimely thick wall of both rhythm and lead melodies and countermelodies. It is certainly no wonder why they chose the track to be the first single as it is a stellar offering that maintains the Goth-gloom of the first and adds copious amounts of fuel to the already-stoked fire.

Even on the albums that were less memorable from the band, they have always managed to achieve a full, robust sound. Couple this with the fact that every release seems to have a different production aesthetic and it is no wonder why the band have remained one of the most exciting outfits in Metal for three decades now. Upon first listening to the album, its production was surprising in comparison to my preconceived notions. It is decidedly less Doom than I expected, a diversion from the rawer previous release, Medusa, and even its predecessor, The Plague Within, a certifiably herculean collection of material. Rather, the sound contained within employs a very modern Metal high-gain guitar tone which blends exceptionally well with the established chorus-heavy approach Gregor Mackintosh takes with his leads. The rhythms are sufficiently chunky, though, as the two-man (along with Aaron Aedy) team’s affinity for palm-muting is gloriously exacerbated. The bass playing of Steve Edmondson is a particular treat. While not overly flashy, he gets a lot of solo time showing off a rich, textured sound wrapped in distortion but not to the detriment of fidelity. The drums are aided by Walterri Väyrynen’s diverse patterns for fills, his exceptionally Bonham-esque hard-hitting, and crisp cymbal work. Holmes’s vocals are very much up front in the mix yet blended well with the instrumentation. The studio was able to capture the very best of the man’s diverse style, with indelibly evocative clean sections, plaintive melodies, and abrasive, yet comprehensible heavier parts. Overall, it is a token Paradise Lost sound that still glistens with the sheen of a novel, evolutionary next step.

The sixth track, “Serenity,” is one of the heavier tracks of the album. It hearkens back to the Icon days with a more upbeat tempo and rawer, straight-forward Metal slant. It is rewarding in that it proves the band still retains that fire within which, while still burning white-hot, is a definite progression. Ultimately, it is proof positive that the band can tap into that same magic of yester-year while still moving things forward. “Ravenghast,” the final track, is a combination of the more eerie side of the band and its Death/Doom roots. When Gothic was released, it was very much ahead of the curve in pioneering that scene. The advantage of 2020 Paradise Lost, though, is in the utter polished refinement of the writing. While those early albums were indeed game-changers, Obsidian is a step forward in content. The quantity of quality is very much increased in this new golden age of the band.

Obsidian is convincingly one of Paradise Lost’s strongest albums. At times, I was reminded of the band that originally ensnared me way back in ’93. There are other moments that have a feeling comparable to classic Type O Negative, a quality intended as only the utmost compliment. When comparing the album to the Paradise Lost timeline, it strikes me as what could have been the sequel to ‘95’s Draconian Times, my personal favorite of their catalog. Hypotheticals aside, though, Obsidian is an album that conclusively could only have been released in 2020. This is because it benefits from the combined sagacity of its members. This is a band at the top of their game who write more consistently in this day and age, and the performance captured here elegantly benefits from these shared experiences.