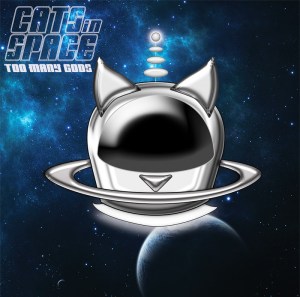 Cats in Space is an unusual name, and its whole sound seems to hark back to another musical era. Was that an accident or part of a great devised plan?

Everything about CATS in SPACE is absolutely calculated as a big hark back to the ’70s. Greg Hart who is obviously… he wrote all the songs, he’s put it all together, he tells all the musicians. He is just a ’70s fanatic. This was something he’s wanted to do for many, many years. Unashamedly, heart on the sleeves, this is all our influences, they’re all there. Or his influences, I should say. So, no, mate, it’s totally calculated. It wasn’t an accident at all.

What about your audience? I’m sure you have quite a diverse audience then?

Yeah. I mean, at the end of the day, the sort of music we do, it cuts across everybody. People who like rock, people who like pop. It’s aimed at an older audience, we have some young … There’s been some younger teenagers there, like last night in Manchester. That was amazing. It’s great it goes right across the board, which means hopefully you sell more records, you know. We’re not stuck in one little niche. It’s obviously aimed at an older generation that was around in the ’70s and was into bands like ELO and Queen and that sort of thing.

Is this going to be a full-time band project for you? Obviously, I mean, yourself and the other guys have got other things musically going on?

Yeah, they have, for the moment, but yes, this is a … We’re already halfway through the second album. Again, it’s ready for next year. We just took on management, quite big management. Once this little tour is out of the way, because we booked for all of that and put it together ourselves, or Greg has. Once this is out of the way then the new management have got a whole game plan. I can’t … I don’t know any details at the moment, but the next few years are going to be very exciting and very, very busy. It’s not just like the weekend warriors. This hopefully, and it should, basically take up all our time and at our age get another little chance and our little stab at the cherry, you know?

What’s the between you and T’Pau? Because I followed your work back to the T’Pau albums. Is it a band now that’s now split, or do you do sporadic gigs, or what’s the state of play with that?

With T’Pau? Carol [Decker], she’s gigging and touring all the time, and she has done since the original lineup split up. She’s always been active. A lot of the stuff she does now is with Ronny Rogers, but it’s with none of the original musicians. She’s got a bunch of players. The drummer she’s got with her now she’s been with for over 20 years. We only had about five years together. She’s always out gigging, she just doesn’t choose to use us guys. I saw her recently, beginning of the year, she’s done a show in London. I went along to see it, because I hadn’t seen her for a long while, and it was great. She’s singing great. It was nice to watch it.

Wonderful. To take you back, what was your first musical memory?

My first musical memory. I have to put a lot of credit to my uncle Robert, my mum’s brother. He’s only seven years older than me. Back in the late ’60s, Robert, he was into Chicago, Yes, Crosby Stills, and all of that. So, my earliest memory of round about eight or nine years old is listening to Chicago, the first album. Then totally just having the love and the bug. Anything with a guitar, really. Any shop that had a guitar, I’d stand in there staring at things. Any TV show that had a guitar in it, I was like, “I’ve been hooked.” They’re my earliest memories, sitting in my uncle’s bedroom, playing with his train set, listening to Chicago, and Yes. I mean, one of my favorite albums ever is Yes – Close to the Edge. And when did that come out,’71, ’72? I still play that album to this day. I’m back in my nan’s house, you know, with my uncle, so I live my earliest memories.

No, I always wanted to be a musician, mate. Always, always. I’ve obviously done lots of other jobs in between tours and stuff, but I’ve never had another career per se, where I wanted to become an architect or anything like that. No, it’s just guitars, music all the way for me, and it will be until the day I die.

Are there any of your own records that you now, looking back, would disown?

Oh, disown. All right, hmm. No, not really, no. I was in a band many, many years ago, in the early ’80s called Ore. We did a one-off single on a little record label called Bandit Records, which was very apt for the guy that ran it, but anyway, that’s beside the point. For a long while I dismissed that, but someone has put it up on YouTube now and it’s like, you know what, I was like 19. I used to disown it but I don’t now. It’s … No, I’m quite happy with my recording legacy. The albums I’ve done for T’Pau, I’ve done a few of my own albums. I had a band called The Herbs, and then I’ve done the Dean Howard Volume One. There’s obviously albums that I’m involved with, like Ian Gillan. Now obviously, the CATS in SPACE. No, I’m proud of what I’ve done.

What would be the best piece of advice that you’ve been given since you started being a professional musician?

I don’t exactly remember anyone giving me advice. My advice would be, it’s just be true to yourself. I don’t know, it’s just the way you conduct yourself within a band. There’s no point getting all prickly and being an asshole. It’s just go out, enjoy yourself, stay true, enjoy what you do. If you don’t enjoy it, then don’t do it. Practice a lot, and just get good at what you do and enjoy it for what it is. Traveling and… Just keep on. Because if you keep knocking on the doors, they will let you in eventually.

Outside of music, in the CV section of your own personal thing, what would be in there as hobbies and interests? What do you do in your spare time? Outside of music.

All right. Apart from music, I mean … I don’t get up to a lot. Although I haven’t got anything like it at the moment, but I love model railways. I’ve had a few train layouts over the years. Where I live now at the minute I haven’t got space to do one, but at some point, I’d love to do another model railway. My son loves it all as well. It’s like … There’s a massive place in Hamburg, it’s the biggest model railway in the world, and it’s just phenomenal. We’ve been out there twice to see that. So, I do a bit, with some model trains. But I don’t know the names of the trains, I just love looking at them and building layouts. I’m not an anorak where I could name every engine I know what I like the look of. Me and my girlfriend, we love traveling. We make sure we get to go away. We love going away and seeing things. Apart from that, no, nothing else. I’m not into sports. I watch it on the Telly, but I don’t do anything like that.

I’m just literally blinkered when it comes to guitars. I just love guitars. Looking at them, trying them, buying them. Fantasizing about what ones I can’t afford. You know what I mean?

Fans are always very demanding and they’re always going to want new songs. You hinted that some songs were already written for the next album. I just wondered if you have any sort of schedule with regards to maybe recording those, getting into your studio for new songs?

All right. Can you discuss that a bit more for me please, what stage are things at present?

We broke up the recording sessions to come and do this little tour. When we finish the end of next week, I think it’s probably about mid-October, I think we’ve got 19 days left in the studio, nine recording days and we’ve set aside 10 days to mix it and all that malarkey. We’re halfway through it already, but it won’t be released until next year. We just are good with our schedule probably next year. We’re just making sure it’s in the can.

The band certainly seem to have a strong work ethic then.

Ready to go. All the songs great. He’s got his songwriting partner, Mick Wilson from 10cc.

An incredibly talented guy. They’ve written a song. And I must say, I’ve done about seven of them so far, the guitars. I just can’t wait for people to hear it. It’s huge. It’s exciting. Very strong songwriting. It’s amazing, really.

Just a final question then, Dean. I just wonder who you would like to interview if you could be asking the questions?

See, the trouble is with that… I mean there’s people I’d love to sit and interview and talk, but then, you know when you say about, “Never meet your idols, you’ll be disappointed.” Yeah, I’d love to sit and chew the fat with Eddie Van Halen. I’ve never met him. Come close twice, but there were too many people around him and I thought, “Oh, one of these days I’ll have a chance.” I’ve heard stories about what Eddie Van Halen could be like, and that would break my heart. I don’t know, really. I mean, there’s a lot of film star-type people I’d love to sit and chat with and interview. Historical people, people who invented things, but I can’t think of anyone off the top of my head. Well, obviously, I’d have a chat with Marilyn Monroe.

Okay, Dean, that’s brilliant. Thank you very much for taking your time. 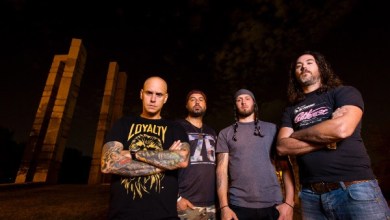 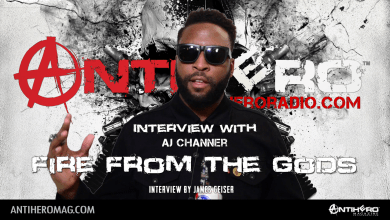 Interview: AJ Channer of FIRE FROM THE GODS at Carolina Rebellion 2017 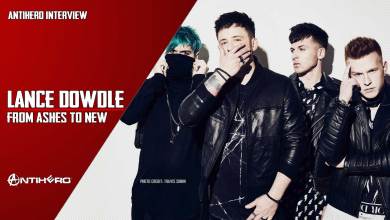 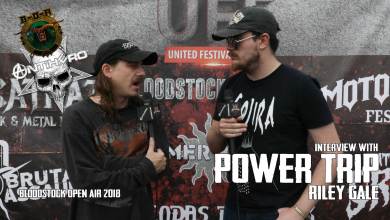