Against Himself hit the Denver music scene in 2014 and immediately set their sights on making a name for themselves. Their release of a four-track self-titled EP in the summer of 2015 caught the attention of Logan Mader (Machine Head, Soulfly, Once Human), which led to Mader producing their upcoming album The Awakening. Against Himself’s unique sound comes from their eclectic influences while their unwillingness to to settle for a bland, status quo is what sets them apart from the mainstream. Expect to see them on tour in early 2018 in a town near you.

How did the members of Against Himself meet and form a band?

Kacey: David, Dalen, and I were in a previous band together. The three of us shared the same vision, while others did not. So I quit that project to form AH. It started with Dave and myself. I then met
Jimmy, who was actually working with my ex-wife shipping beer bongs and dick shaped objects, and we brought him in. It was a couple weeks after jamming together that we brought in Dalen from the previous band. That’s how it all started. I guess you could say I stole members from the previous band and here we are.

The band believes that the only boundaries a person has are the ones that they create for themselves. Does this belief weave itself into your music, and has it inspired your band’s name?

David: Absolutely. It’s my driving force. I named the band and write the lyrical content, so it definitely weaves itself into the band in many ways.

What does the process of making music look like for you guys?

Jimmy: Kacey and Dalen both write guitar parts first, whether that be a single riff that we work off of, or a whole song. Then I write what sounds best for each song and determine how the drums will affect the feel of the song. Lastly, Dave writes vocals and comes up with melodies once the instrumental parts of the song are completed.

Dalen: Once we have a solid song idea we track out rough demos at home. We pick and choose the best ones before taking them to Logan Mader’s studio, where the real recording begins and he puts the “Mader-ade” on everything.

When Against Himself’s first EP was released, a Colorado rock station picked up your song, “Someone You’re Not.” Did you ever imagine that one of your songs would be picked up so soon?

Dalen: Honestly, no! I recall driving to pick up a pizza and hearing it come on the radio. I definitely felt a sense of accomplishment, but it only made me hungrier to write more worthy music!

Jimmy: We kind of rushed into the recording of our EP and the musical aspects suffered mildly because of that. So hearing about a local radio station playing one of our songs was a really big shock to me!

What musicians and groups influence your music?

Kacey: This list would literally take up two pages. For me it really just depends on who I am listening to that day. We don’t just listen to a certain genre or a certain group of bands. We all listen to so much music and have very different influences. Our sound is not based off certain influences, but more based off which bands each of us is listening to when we write.

Jimmy: My favorite drummer is The Rev from Avenged Sevenfold. He really knew how to bring out the emotions in their music and knew all the right parts to play at the right times. I also love John Bonham’s style and soul he put into playing.

Dalen: For me it all started with Ace Frehley of KISS. Something about his lead style and overall image really captured me. My grandfather taught me a lot of Johnny Cash on acoustic. Lamb Of God is my shit though! I’ve been jamming out to a lot of Kvelertak and Incubus lately.

Do you have any non-musical influences?

Dalen: I was super into skateboarding growing up and looked up to all the pros at the time. My favorite was Rodney Mullen! The man was an inventor! Skating is what it is today because of him, and that’s a badass accomplishment.

Kacey: My two sons have been my main influence. I support them no matter what and want them to see what I’m doing and just understand how important it is to go after what you really want! Never settle for a life that you are not happy with!

Jimmy: Just my family, friends, band, and of course our fans. I wouldn’t be here now if it weren’t for them!

You recently performed at Whisky A Go-Go. What was it like to perform there?

Jimmy: The venue is obviously legendary and it was an honor to play there. The people we worked with were all very talented at what they do and were also genuinely nice. The sound that place can put out is also very impressive.

Kacey: It was fucking amazing! It’s the Whisky, lol. Being on the same stage as so many of my favorite musicians was a real eye opener for what this band is turning into. We really just love playing shows. When we walk out onto that stage and you just feel the energy in the room that’s when we all feel the most like ourselves.

Dalen: It was an incredible experience! I’ve read so many biographies growing up of my favorite musicians that mention their times at The Whisky. Some of the things we do is hard to me to wrap my head around. But the Whisky was sick! From the staff, to the crowd, and just the overall experience with my brothers! It literally whipped me out and I went and crashed in the green room after our set, which is a first! Hahaha.

David: It was a unique and overwhelming moment from arriving to the venue, to playing a shorter, unintended setlist. Nonetheless, it was amazing to finally play such a benchmark of a Hollywood novelty!

How would you describe your music to a potential fan?

David: Everything you didn’t know you wanted!

Jimmy: It’s pretty heavy at times, and soft(er) in other songs as well. There is something for everyone. I just want to take our fans on an emotional ride and connect with them at a level that can only be achieved through music.

Dalen: This is a hard one for me to answer. I prefer to let the music do the talking.

Kacey: That’s a tough one. I would describe it as just pure hard rock and metal, but just because I hear it that way doesn’t mean others will. That’s what I love about art, we all hear it and see it differently.

What are each of your hobbies outside of music?

Dalen: Guitar! Only half kidding. I used to skate until it became too much of a risk to my fingers and wrists. I can solve Rubik’s Cubes, but that’s not something that I sit around doing all the time. I mainly play guitar anytime I’m free.

Jimmy: I like to party a lot and go out to bars with friends and be social. I also play some video games when I have the time.

Kacey: I really don’t have any hobbies outside of music. Our lives literally consist of music, music, more music, and work. We all take this very seriously so I try to devote as much time as physically possible to it.

Against Himself’s single Within was released almost a year ago. Are there any plans to release more music soon?

Yes! We are very excited to release our debut album The Awakening, which has been recorded with the wizard Logan Mader. It is completely finished, but we do not have a set release date. We will be announcing that very soon under a label, so stay tuned for that! You won’t want to miss out!

What are the band’s plans for the rest of the year?

For the remainder of the year we will be doing a lot of writing for a future album, as well as preparing for the release of The Awakening. Shooting a music video is on the list. We’re also looking into some pretty awesome tours with reputable bands for early winter! Not going to mention who, but wait for it!

What equipment do you guys use?

Jimmy: I use Vic Firth drum sticks, Sabian cymbals, Remo heads, and DW hardware. I’ve spent a lot of time looking for great gear that I feel really comfortable playing with and gear that has the sound I’m looking for. All of those brands really help me do what I do as the drummer in Against Himself.

Kacey: Randall amplifiers all the way! My main guitar is a Ltd MS-1. In my opinion the V’s are the most fun guitars to play live. You can literally throw them around so easily. 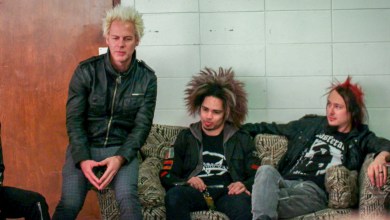 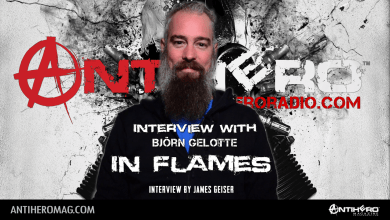 Interview: Björn Gelotte of IN FLAMES at Carolina Rebellion 2017 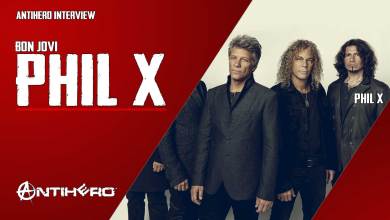 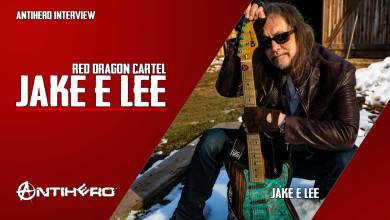