HEADS UP LADIES OF THE EIGHTIES!! I don’t know about you, but I can say that Leif Garrett was probably the first celeb crush I had growing up. I remember seeing his picture on the walls of a few of my friend’s older sister’s walls – you know the cutouts from Tiger and Teen Beat Magazines? I especially loved it when they had the bonus poster insert issues…those were awesome!
If you’ve ever thought that you’d like to know the ins and outs of people’s lives, written in their words, I have some great news for you! Leif is settling down with a pen and a legal pad to start etching his life’s story out for us!
Personally, I’m really looking forward to this book because I think it’s fascinating to hear stories told by the person’s own words instead of seeing a documentary about them or a made for TV movie. There’s something about absorbing the written word about a person that soaks in a little deeper than a movie, you know?
Here’s what I know about this project so far:
Leif Garrett has announced that he has signed on with well-known New York literary agent John Silbersack of The Bent Agency to handle the sale of his upcoming memoir. “It’s a privilege to be working with an agent as experienced and well-respected as John,” Garrett said. “I’m confident that his knowledge and insights will not only result in finding the right publisher but also help me create the book that I really want to write.”
Leif debuted his first record, Leif Garrett self-titled if you recall, in 1977 which shot him into the hearts of girls worldwide. Remember this sweet cover? I do! I couldn’t tell you a song off of it, but I remember the cover!  Now, Leif’s life is so much more than a recording career and you may be thinking, “Why should I pay attention or look for this book to come out?”
Well, you don’t have to but why I think this is a rather important autobiography in the Big Picture of Music History. And it’s totally OK to be excited about or to anticipate its release! And here’s why: many of us that love music so much that we’ve decided to take a stab at doing something in the industry that we love, might not be here or where we are if it weren’t for Mr. Garrett.
I’m not kidding, nor have I hit my head on anything, lately. Even the heaviest rock fan could probably trace the ancestry-like line back to Leif. Hand to God – I swear you could. If there was a genetic marker in Gen-Xer’s DNA  that pointed to the origin of music, there would be Leif’s head on one of those rungs that make up the helix in all of us.
You know it’s true, deep down, you totally know it’s true. As more comes out about this book, we will let you know and it’s my hope that we get to talk to Mr. Garrett about how writing his memoirs came into play. If so, you’ll be the first to know!
Til Next Time – MRML – Cherri 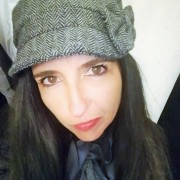