Monster Energy Carolina Rebellion expands to three full days in 2016, featuring best of today’s rock, along with legendary classic artists playing on four stages, the expanded Pig-Out BBQ village, and premium camping facilities. The 2016 festival is set for May 6, 7 and 8 at Rock City Campgrounds at Charlotte Motor Speedway in Concord, NC, just outside Charlotte, NC, and will feature performances from over 50 top rock artists including Disturbed, The Scorpions, Rob Zombie, ZZ Top, Five Finger Death Punch, Shinedown, Deftones, Lynyrd Skynyrd, A Day To Remember, 3 Doors Down, Alice Cooper, Bring Me The Horizon, Cypress Hill, Pennywise, Lamb Of God, and many others.

The Mid-Atlantic’s Biggest Rock Festival sold out in advance in 2015, with a record-setting 80,000 fans in attendance for the fifth annual Monster Energy Carolina Rebellion.

Brent Smith of Shinedown comments, “I’ve said it before, and I’ll say it again…Rock n’ Roll is a way of life, and Carolina Rebellion is living proof…We are honored to be on this year’s lineup. We hope the Rebels are ready, because we are!!!”

Billy Gibbons of ZZ Top says, “ZZ Top is coming at’cha with some raucous rock ‘n roll to the Rebellion. We are looking forward to this massive rock party…Come on!” 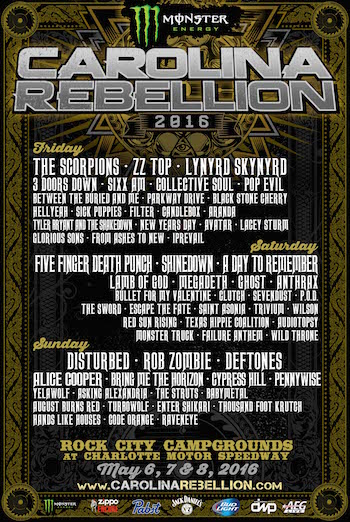 Co-Executive Producer Danny Wimmer says, “From its inception, we believed Carolina Rebellion would grow into a three day festival. There is a loyal rock fan base here to support Rebellion‘s continued growth. While this of course means another full day of music, including more classic artists, the entire festival experience will be noticeably enhanced. This year’s emphasis will be on food. We will be hosting a ‘Gourmet Man Food’ offering that reflects the cultural food explosion that is happening all around the country.”

Current Ticket Prices are as follows:

New for 2016, fans can also purchase special 2 Day General Admission (Friday/Saturday only or Saturday/Sunday only) from $99 + fees.

Hotel and Camping Packages are also available now at www.CarolinaRebellion.com. All Hotel Packages are for three or four nights and are available for 2 or 4 people. Each package includes access to the Thursday Night Campground Party in the campgrounds. Camping is open from Noon on Thursday, May 5 through Noon on Monday, May 9. Camping Packages also include a $25 merchandise voucher (one per person), access to the VIP Lounge in the concert site, event poster (one per person), and access to the Thursday Night Campground Party.

A VIP Lounge Upgrade with access to the Pabst 1844 VIP Lounge and the Jack Daniel’s Old #7 Club is also available for purchase to those who purchase Weekend General Admission tickets during the presale and general on-sale.

Monster Energy Carolina Rebellion 2016 layaway packages are still available for purchase. This includes all Hotel, Camping, and VIP packages. For full details and to purchase layaway, general admission and VIP tickets, as well as Hotel and Camping packages, visit www.CarolinaRebellion.com.

Monster Energy Carolina Rebellion is produced by Danny Wimmer Presents and AEG Live and is supported by great corporate partners including Monster Energy, Zippo Encore, Pabst Blue Ribbon, Jack Daniel’s, Bud Light, and The Music Experience. These partners, along with many others, will feature interactive experiences, artist meet & greets, and other unique fan engagement opportunities throughout the festival. 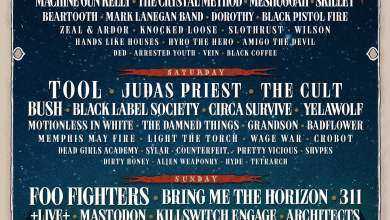 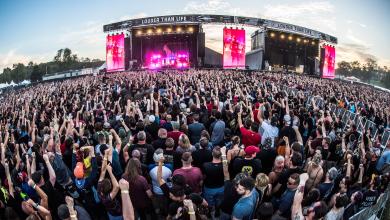 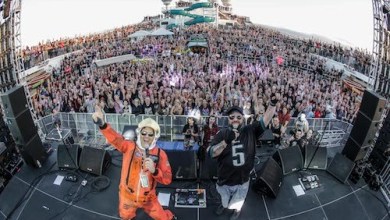