Festivals have a long history in social and musical  cultures through the years. In the UK rock and metal musical genres have been exclusively represented through the long-standing Reading Festivals and Monsters of Rock (which later became Download Festival). However, where the aforementioned focused on presenting a diversity of rock styles they larger avoided the more extreme/brutal and much heavier music of the scene. After several years running an indoor festival for a more extreme audience base the organisers of Bloodstock saw an opportunity in the market for expansion. Their ethos of having a harder edged festival representing those much neglected and also largely much maligned bands should be taken up a new level.

Thus a new outdoor festival was born in 2005, initially with a single stage in operation. As popularity of the event took off a second stage was added in 2006 with the introduction of a stage specifically to support unsigned acts. A unique concept and one that was universally embraced, giving a new generation of bands an opportunity of exposure to a large audience. 2007 saw further expansion with the introduction of a third stage. The festival portrays itself as a family run festival, and this also carries through to the organisers who have brought family members on board. Essentially this is where it differs from many others. It is true that festivals need to have a sound financial plan in order to operate successfully, but where others have this solely as an objective, other areas are then overlooked to achieve this end. Where Bloodstock succeeds is that it listens to its audience, takes on suggestions and recommendations, and actually acts on them. I have attended many festivals over the years which have their faults/issues and problems…Unfortunately, negative feedback is largely ignored in the organisers quest to chase the profitable cash cow. They have become greedy to the detriment of the very festival goers who line their pockets.

This year I will be attending Bloodstock Open Air Festival for the first time and eagerly look forward to a cross section of some legends – from Twisted Sister and Slayer, to some upcoming newer acts. This diversity sets it apart from other festivals which tend to rebook the same headliners almost on a rotational basis. Fingers crossed for some rare UK summer sunshine for slightly longer than a brief period over the 3 days. The reputation of Bloodstock I am very familiar with – now to see if it lives up to it with the quality organisation and legendary Bloodstock family camaraderie.
[separator style=”line” /]

Legendary Motorhead guitarist plays the songs of his iconic employers PLUS songs by artists that have inspired him. Bound to feature a few surprises and also get quite emotional when he talks about Lemmy. Not sure who else is featured in the band but the All-Star label certainly demands a viewing!

I really can’t understand the appeal of this band and they haven’t convinced me with their musical offerings. I have heard that their live shows can be “entertaining” – dancing crabs, and robots anybody? Investigate with me to see if they can live up to all the hype. Will they have invented a new dance for their latest single “Hurricanado“? Come along and see for yourself.

Huge in the MTV-era of the eighties with many video hits. Legends that are playing their very last UK show ever. I have never previously witnessed them live – hopefully they will bow out disgracefully.

Watch the power of the mighty Simon Hall of Bloodstock Festival fame bring the music “right in yer face!” There is no escape, and indeed no barriers between band and crowd at their shows – bringing the metal quite literally to the masses. Up close and personal is how it always gets with these guys!

Apple Core revisited from the underground band with legendary status. The band’s recent reunion and live shows have proven that the incendiary frontman, Howard “H” Smith, has not mellowed with age. New band behind him but delivering the classics with all the power, and indeed humour, that they presented first time around. Entertainment personified.

Hard to define genre-wise, as this avant-garde Norwegian band play what they term “black jazz.” Expect hard-hitting brutality with a saxophone. Doing something different. Traversing genres and forging their own musical path. In short, I don’t know why, but it works.

Another band that do their own musical thing which isn’t easily bracketed or defined. Hailing from France, I have seen them twice in a club setting. Keen to test if they can convert that energy into a festival setting.

Supergroup who do their own thing musically. While its always great to see a bunch of legendary musicians all on stage together, their album has proven that it’s so much more than just a curiosity and pet project. This should be great. One of the most expected sets of the festival for me personally.

Have to finish this list with not just one but two of the legendary “Big 4” of the Thrash Era. Anthrax and Slayer! – over thirty years of experience each and they don’t appear to have mellowed with age. Both in a club setting and at a festival they always quote “Bring the Noise!” I have been watching both of these bands since the eighties and will always continue to enthusiastically enjoy their live performances!! 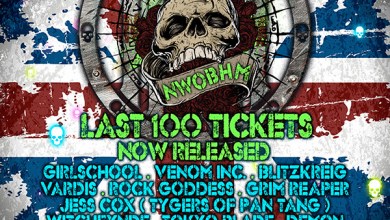 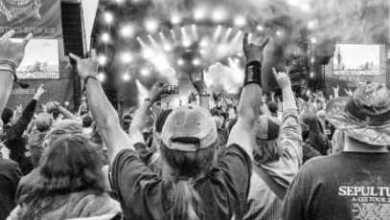 Just one month to go to BLOODSTOCK 2018