Interview with Brock Lindow of 36 Crazyfists

36 Crazyfists recently released their seventh studio album, Time and Trauma, on February 17, 2015. This also marked the first album to be released on the Spinefarm Records label. The band is currently touring with Nonpoint in support of Time and Trauma, and photographer Greg RaMar caught up with vocalist Brock Lindow at the DNA Lounge in San Francisco, California for a chat about the latest album, the band’s history, hockey, living in Alaska, and other good stuff. 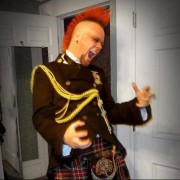