In the UK, the two biggest heavy hitters when it comes to metal festivals are the enormous Download and the niche-yet-beloved Bloodstock. And while Download 2017 saw the three-day get-together pander to a more mainstream, melodic rock demographic thanks to the appearance of names like Biffy Clyro, AFI, Good Charlotte and A Day to Remember, this year’s Bloodstock brought with it new, extreme heights for the Catton Park rock-a-thon.

The festival came to life on the evening of Thursday, 10th August, where its second stage, the Sophie Lancaster Stage, opened early to accommodate four up-and-comers: Ramage Inc., Gurt, Wind Rose and the headlining Battle Beast. While all bands welcome Bloodstock 15,000 attendees excellently, it is the latter two acts that are true, early highlights, with the visceral, folk-inclined Italians Wind Rose making their debut on British shores and receiving a plethora of huge pits and walls of death as a result of their powerful, historical tunes. Battle Beast keep the melodies flying high as they take over, bringing Bloodstock back to its power metal roots with the operatic delivery of frontwoman Noora Louhimo.

This segues perfectly into the Friday, where the main stage, affectionately dubbed the Ronnie James Dio Stage, is opened by fellow female-fronted rockers Forever Still. Despite the small crowd the Danish quartet receives, the pipes of vocalist Maja Shining on such ballads as “Save Me” provide enough raw emotion to get Bloodstock’s first full day off to a heart-wrenching start. Chelsea Grin take the stage immediately after, their adherence to exaggerated deathcore archetypes so loyal and unwavering that it hinders on the point of parody. But, luckily, the adored Whitechapel follow suit, showing the crowd how a death metal/metalcore fusion should truly be delivered. Songs from the band’s new record Mark of the Blade become the high points of their criminally short set, injecting headbang-inducing groove metal into the proceedings and being met with pits galore henceforth.

After the Dani Filth-helmed Devilment lay down a visually stunning, Gothic metal triumph on the main stage, British rockers Dendera take the Sophie tent, calling back to such exciting groups as Iron Maiden and Metallica in their grandiose, heavy, ‘80s-inspired compositions.

The melodies of Soilwork entertain as usual on the Dio Stage, perfectly setting up for fellow Swedish melo-death icons Amon Amarth later that night, but they pale in comparison to the complex yet hook-laden Decapitated. Hot off a groove metal masterpiece in the form of Anticult (2017), four songs from the eight-track record sneak into the Polish quartet’s set, with the group’s technical perfection matching their sheer energy and brutal delivery. Easily, Decapitated was the highlight of the Friday, yet the follow-up Testament don’t disappoint either, although the thrash pioneers suffer a great many audio issues that were out of their hands. What is well within their hands, however, is the setlist, which suffers from a great lack of cuts from The Legacy (1987), despite this year marking the debut album’s thirtieth anniversary.

Blind Guardian’s European power metal stylings find themselves sandwiched between two bands (Testament and Amon Amarth) that pride themselves on fusing melody and brutality, while the old-school Germans place their stock firmly in the former category. Despite Blind Guardian being the pioneers of their genre, it is a genre that has been hammered into the ground by countless copycats, which sucks a great deal of the excitement from their set.

Amon Amarth close out the Friday with a 90-minute dose of Viking perfection, peaking as vocalist John Hegg parades around the Dio Stage with a pyro-triggering Mjolnir for “Twilight of the Thunder God”. Other highlights include the duelling warriors during “The Way of Vikings”, the appearance of Loke during “Father of the Wolf” and a massive break-out of Epic Viking Rowing, all of which combine to make for an endlessly interactive, exciting performance, and a perfect closer for the first complete day of Bloodstock.

Saturday starts on a much better foot than the day prior, with Californian tech death rockers Fallujah bringing undiluted, complex brutality in spades, before Winterfylleth, Havok and Annihilator all continue the momentum, delivering sets that match audience expectation. Two records are also smashed later in the afternoon: Raised by Owls, the comedy geniuses that they are, demolish the attendance figures for the Hobgoblin New Blood Stage, while Municipal Waste breaks the Bloodstock record for most crowd-surfers at a ridiculous 711 people (yes, really, they counted). Hatebreed keeps the main stage anarchy at massive levels, the short yet sharp “Looking Down the Barrel of Today” crushing skulls all over Catton Hall.

Kreator ups the theatricality as they bring a plethora of backing screens and pyro for their main support slot, laying out titanic track after titanic track from their brand new opus Gods of Violence (2017). Frontman Mille Petrozza giddily manhandles his own CO2 cannon, waving it about without regard, while fireballs are utilised more than liberally at every available opportunity.

This leads perfectly into penultimate headliner Ghost, who, after a delayed start, begin perfectly with the huge “Square Hammer”, followed by the bizarre introduction of the ‘Sisters of Sin’ (aka, female fans dressed up as nuns who then feed communion wafers to the crowd during “Body and Blood”). Once the Sisterhood leaves as abruptly as they came, momentum is clawed back mid-set by a collection of the band’s biggest and most crowd-pumping hits: “Cirice” leads into “Year Zero”, which in turn leads into the unhallowed, romantic ballad “He Is”. By the time the evening has come to a close at the sound of the “Monstrance Clock”, Bloodstock had been blessed with one of the most theatrical and intriguing shows of its entire history.

The melodic doom rock stylings of Ghost are totally offset on the Sunday morning by the arrival of Broken Teeth (or, as this set would soon establish them, a poor man’s Hatebreed) followed by the unbelievably intense Venom Prison, who lay out a half-hour of death metal without any interlude and little to no audience interaction. Behaving as if they were inhabiting their own universe, the young, lauded Brits perform in a manner that is simultaneously direct and honest, yet also alien and unnerving, in a set that almost defies words in its purity.

Even with their frontman, Jeff Becerra, confined to a wheelchair and their lack of any new material for over thirty years, San Francisco thrash/death metallers Possessed still rock as if it was 1986, giving off an inspirational display on the main stage as a result. Hell defy all known realm of logic as they take the stage, with singer David Bower, at his zaniest, standing on stilts and dressing as an enormous depiction of Satan as he bellows out his operatic, soaring vocals. The now-infamous and amazingly controversial exploding bible also reappears, to the delight of all the lost souls in Derbyshire.

Skindred very quickly become the best of the day as their party rock anthems let Bloodstock explode in a mixture of accessible, excitable hip-hop and all-out heavy metal. Benji Webbe is an indomitable frontman as usual, his mastery of the crowd unrivalled by another other act of the entire weekend. Arch Enemy up the brutality of the rap rockers in their subsequent set, with frontwoman Alyssa White-Gluz carrying the visual element while the instrumentalists, in their uniform black garb, don’t exactly make for the greatest thing to look at.

When compared to the fascinating feasts for the eyes that were Amon Amarth and Ghost, everyone expected final headliner Megadeth to fall short. However, the Dave Mustaine-led thrash icons hold their own, peaking with a powerhouse second encore of “Holy Ways… The Punishment Due” as well as the Kiko Loureiro instrumental “Conquer… or Die!”, which demonstrates perfectly how the inclusion of the Brazilian shredlord as lead guitarist has, in many ways, reinvigorated what was, for a time, a tired and rather by-the-books live act. The biggest surprise comes as, after long last, a track from the band’s debut Killing Is My Business… (1985) shows up, with “Mechanix” coming as if from nowhere to a massive roar of approval. 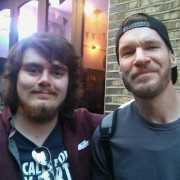